If you are someone who is a beginner in Git, this blog is for you. As a beginner, I will assume that you have Git installed in your system. If you don’t have it, you can get the latest version here for your operating system. In Linux, you can install it via your package manager. Once you've done that, create a GitHub account here. The next thing you have to be comfortable with is the command line and thirdly, we will create a simple repository consisting of a code file and a README.

Before we dig deeper, let me tell you what is Git?

Git is a version control system(VCS) for tracking changes in the project directory and manage source code. It is free and open-source. Git takes snapshots of a project, and stores it as unique versions. Git is designed for distributed development. So it has a complete long-term change history of every file, even the changes over the years. If you are involved in a project, you can clone the project’s repository and work on it locally and then push it to the remote server. It allows you to collaborate with your team too.
Now let’s step through the standard set of actions that we commonly use. Some of the common Git commands we need to understand as a beginner is:

· git clone
To clone an existing repository. When executed, the latest version of the remote repository files on the master branch will be pulled down and added to a new folder

· git add
Add all new and changed files to the staging area.

· git push
It sends local commits to the remote repository.

· git pull
To get the latest version of a repository run git pull. This pulls the changes from the remote repository to the local computer

· git log
To show the chronological commit history for a repository.

· git status
It returns the current state of the repository. If a file is in the staging area, but not committed, it shows with git status. Or, if there are no changes it’ll return nothing to commit, working directory clean.

These are some of the fundamental commands that we need to know before we begin using Git. There are more other advanced commands, but you won’t need them in the beginning. Before we actually begin, let’s tell git who you are. just mention your Git username and email address, since every Git commit will use this information to identify you as the author. Open your terminal and run these commands:

1. Create a local git repository
You need to create a new repository while creating a new project on your local machine using git. Open your terminal and navigate to where you want to place the project using the cd(change directory)command. For example, if you have a folder named ‘beginners_git’ in your home.

The first move to that folder where you want to initialize git and then enter git init command as shown   below:

After creating or modifying the file, you can check the status by:

This above one indicates that once you have added a file in the folder containing a git repository, git will notice that changes have been made inside the repository. But unless we use the git add command there won’t be any official track of it. So use
git add file_name  #to add a particular file
or
git add.   #to add all files
and check the status again as shown below:

Likewise, you can add any files like PHP file, python file, etc of your code irrespective of programming languages.

3. Create a commit
Now let’s have our first commit. When you save a change, that’s called a commit. When you make a commit, you should include a message about what you changed and/or why you changed it. This is a great way to let others know what you have changed and why.Moreover, when you come back in a month to look at your commit history or Git log (the list of commits), you will know what you changed in the files.
Use the git command :
git commit -m “commit_message”

Now suppose you just made a wrong commit or placed an unwanted file inside the repository or  there is an error in the application, you can unstage the files you just added using:

After this command, you can make whatever the changes you need, then add to staging and commit again

4. Push the changes up to the GitHub
Now the changes you have made are at the head of your local working copy, it’s the time to update the changes to GitHub. First login to your account in GitHub and create a repository by clicking on the green icon with New.

You’ll have an option there to initialize the repository with a README file, but no need to check it now. Fill the details and click Create Repository like below: 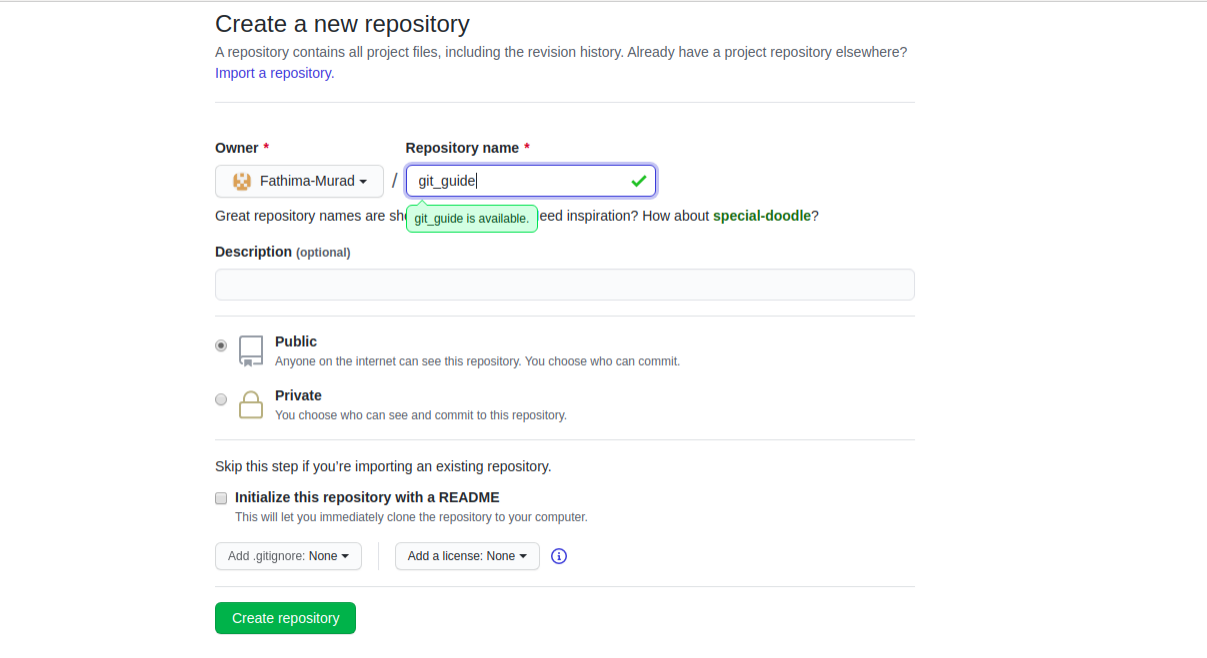 Now, we will follow the second set of instructions, “or push an existing repository” shown in GitHub. Let’s look at the command that we are going to run in detail, we are telling Git to add a  remote called origin with the address      https://github.com/<your_username>/git_guide.git
(i. e., the URL of your Git repo on GitHub.com). This allows you to interact with your Git repository on GitHub.com by typing origin instead of the full URL and Git will know where to send your code.

Now copy the commands and run it in command prompt

And now if we go and check our repository page on GitHub, it should look something like this:

And that’s it..! You’ve just added the files to the repository you just created on GitHub.
Now let’s look at how do we download and work on other repositories on GitHub or How do we collaborate with our team...and make branches too?

Creating a branch
Now let’s try something advanced by creating git branches. For example,if you want to add a new code to your project you can create a new branch just for that code without affecting the main part of the project. Once you're done with the code, you can merge your changes from your branch into the master branch. When you create a new branch, Git keeps track of which commit your branch 'branched' off of, so it knows the history behind all the files.

To create a branch

To confirm the branch has been created use the git command:

Then checkout to that branch by:

Now if you check the branch by git branch command, you could see an asterisk next to the branch we created, indicating that you are currently in that branch and you will make commits from there.

You can also use git checkout -b branch_name that will automatically create a new branch and then move you to that branch, off of the master branch.
Now let’s push the new branch to your new GitHub repo.

GitHub will automatically create the branch for you on the remote repository as like this:

Cloning a Git Repo
Locate to the directory you want to clone the repo. Copy the link of the repository you want and enter the following:

When you clone, you will get the whole repository in your local. Then you can make the changes you want and then do

respectively.
Now imagine you and your friend are collaborating on a project. You both are working on the same project files. Each time you make some changes and push it into the master repo, your friend has to pull the changes that you pushed into the git repo. So to make sure you are working on the latest version of the git repo each time you start working, a git pull command is used.
So to make sure those changes are reflected on my local copy of the repo:

Now if you run git log command, you can get the history of commits you made to your files. These are some of the basic things in git.

Odox Soft Hub can help you with services provided in web designing, mobile app development, and many more. We provide the best Odoo services with 100% client satisfaction. For any queries drop your mail at [email protected]To explore more about us feel free to get in touch with us.
in Ubuntu
Top 10 Features Of Ubuntu 20.04